Not exactly a ‘Clammy’ Afternoon 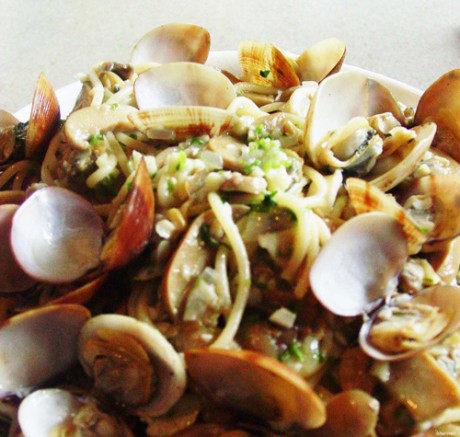 When I was a kid, I used to hate our local clam, halaan, WITH A PASSION. I can never understand its taste. It’s slightly tart, gingery, salty, sometimes grainy (especially if it wasn’t cleaned well) and gummy. My folks always prepared it the same way, boiling it in hot water with some ginger. UGH! It was such a dreadful fare that I often excused myself from the table and went back to bed. No bland clams please, kthx.

It wasn’t until, again, one of my aunts who worked in Italy came home and showed me how to enjoy these clams with pasta. Known to them as Pasta con Vongole, this sweet yet briny dish completely changed my opinion of halaan/vongole forever.

Last weekend’s trip to the market brought me back to my aunt’s pasta. A little inspired by the freshness of clams, I thought I’d give it a shot in cooking one of my favorite pasta dishes. This is a very simple and easy dish, stripping the flavors to its barest essentials.

What I love about Pasta con Vongole is it’s a dish that doesn’t overcook the seafood nor do the other flavors compete with the taste of the clams. In fact, if your seafood is fresh, this is one of the best dishes to taste the freshness of the clams. If you can get your clams fresh, then this is the perfect dish for it!

The key to this dish is getting your clams/halaan/vongole really fresh. If the clams are a little old, the texture would be gummy and the broth slightly bitter. If you can cook the clam on the same day that you bought it, all the better!

Preparing the clams
The first thing you do when preparing the clam is getting the dirt out of the clam. My aunt would clean this by soaking the clams in cold water and wait for them to spit out the dirt. This takes some time to prepare since it all depends now on the clams when and how much dirt they’ll be spitting. So when we buy clams from the market, we let them spit the first set of dirt in an hour, change the water, then let it spit again until it has no more dirt to spit. This takes from 2 to 3 hours to do so make sure you’re not hungry when preparing for this. Once you noticed that the water doesn’t have dirt in it, your clams are ready to cook!

The Pasta
The best that I can suggest for this dish is to slightly undercook your pasta. Meaning when you bite it, you can slightly see the uncooked center of the spaghetti. There’s a reason for this. You’ll see. :3

The Sauce
1. In a cold pan, put some olive oil and the garlic. Heat the pan in a low fire then wait for the garlic to slightly sizzle. The key here is to infuse garlic into the oil.
2. Once you see the garlic soften or slightly sizzle in the oil, throw in your fresh clams and parsley.
3. Steam the clams until the shells open. Turn up the heat for a bit so that the clams steam faster. This only takes a short while, around 8-10 minutes. Sometimes even shorter. Just remember: once the shells are open, take the clams out.
3. Take the pan out of the fire and separate the clams from the broth. De-shell half of them and set it aside.
4. Leave a cup and a half worth of broth in the pan. You can use the excess broth in other dishes or drink it as soup!
5. Throw in your half-cooked pasta on the broth and let it absorb the flavors of the broth until it’s cooked. The sauce would be slightly thicker and if you want it to be smoother, you can add some olive oil.
6. Toss in the clams once the pasta is cooked and serve it up with some parmesan and more parsley on top.

Note: Some people use a bit of white wine in steaming the clams. If you’ve got some wine in your fridge, putting a splash of white wine gives it a nice tart taste. Sometimes, I also throw in some chili flakes if I want it spicy. 🙂