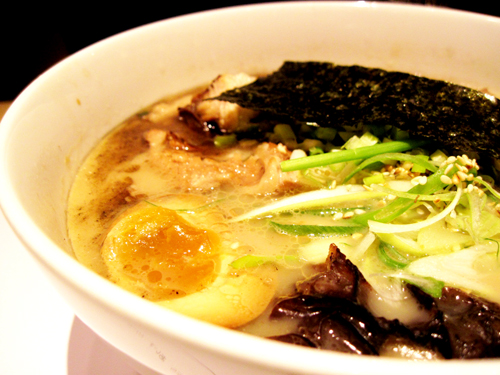 When I heard that Ramen Bar has tonkotsu ramen, my heart was fluttering with joy over the idea of reliving the magical flavors of tonkotsu ramen that I managed to taste in Ippudo. With great enthusiasm, I went to this restaurant a little after its opening and was mesmerized with the options that they had for their ramen. Feeling lush, I ordered the Ramen Bar Special which contains more meat, more mushrooms and veggies and their kurogoma abura. Sadly, after a few bites, I was greatly disappointed on how this restaurant just didn’t deliver. The taste was burnt and weird. There was too much in it and the noodles they used were these thick mami-like noodles (quite a contrast to the thin delicate noodles of Ippudo). Eating it was like seeing a guy who wore too much bling, gel, and perfume on a first date. There was too much of everything that I couldn’t even finish my bowl. The kurogoma abura tasted like burnt oil rather than sweet black sesame.

The second time I went, my company opted to order a variety of ramen. Someone ordered their Miso ramen. Someone else ordered Shoyu. I decided to order their chicken namban in want to taste something different since I know their ramen was a disaster. My chicken namban turned out quite a disaster too as it had too much mayonnaise. My friends let me taste the broth of their ramen and it still had those conflicting flavors trying to sell itself as a package.

Hence, by the time a friend wanted me to take her to this restaurant, wondering why in hell I abhorred the place and yet everyone loved it, I gave it a shot and went again. This time, I went for the plainest of their ramen: the Shio ramen. Unlike the others, it only glistened white with a few portions of meat, vegetables, and egg. As I took a sip of my first broth, I finally saw the tonkotsu that they were so proud of. It was a flavorful porky broth with enough brine to make me smile. I finally finished their bowl of ramen.

I realized then and there that you can’t mess up what’s already good. Their broth, as it is, is good. In fact it’s such a strong flavor that putting anything on top of that broth requires an adjustment on the broth itself in order to welcome the new flavors in. So that makes Shoyu and Miso something that will either make the broth too salty or overly flavorful. Even the kurogoma would have to pass as it just doesn’t mix as the broth on its own has some sesame in it. Unless they could perfect their kurogoma and make it bittersweet, it’s best not to experiment with anything else. The noodles are still a little different. Not exactly like mami but it’s still not quite there yet. I wonder if the owner had problems sourcing the noodles here in Manila but if I see restaurants in Little Tokyo managing to pull out some good noodles, I don’t see why Ramen Bar can’t do it.

Still… that special offering doesn’t make the ramen any special. If anything, it miseducates the tongue on what flavors it should be tasting when eating the ramen. I feel that the broth, the heart of the ramen, doesn’t get to sing when it’s got all of these add-ons and what not on top of it.

Is it the most authentic Japanese ramen I’ve tasted? If its intention is to make authentic tonkotsu ramen then, no. I was sharing to friends that Ippudo has set such a high standard for me that it made me understand what great tonkotsu ramen should taste like. In fact, Little Tokyo’s Riozen has a wonderful tonkotsu ramen closer to Ippudo than Ramen Bar could ever be. And it didn’t have all of these special add-ons with it. 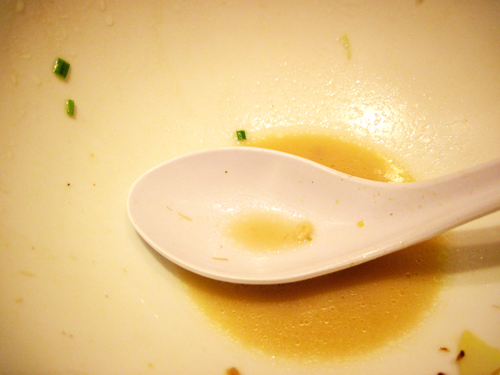 Is it a good ramen at least? Yes. I can at least tell from the expressions of people I’ve dined with that Ramen Bar does serve good meals. I am probably just being picky when it comes to my ramen but I suppose if I hadn’t tasted great ramen in Japan, I probably would have a higher regard for Ramen Bar. After tasting their ramen plain, I liked it a lot more and wouldn’t mind going there again for that same bowl. It’s not as good as my Ippudo experience, but it’s all right… I guess.