“Touch” is definitely fun to sing in Karaoke

Oricon posts news about the top 10 Anisons (Anime songs) sang in karaoke. I’m quite amused with the list and was surprised with what people have been singing in karaoke. So let me give you guys a run down if you are as guilty of […] 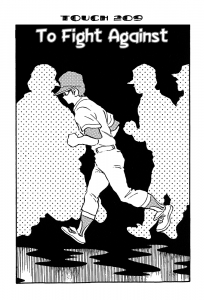 Touch. I got into Touch one afternoon where there was nothing I could do but watch some free videos online. It was considered as the highest rated anime ever. It is so popular that it’s an institution. It is, as some have noted, a classic among all manga stories. According to my friend’s mother, it was so popular in Japan that TV stations looked for girls like Minami. Koushien became the most popular sports event over the summer. And the manga turned Adachi Mitsuru as the premier mangaka of the 80s. In short, it was the series of the decade.

Years later, a stale lunch, natsu anison, a visit to Manga Kissa 10, and a random curiosity caused me to grab the series from the shelf. So what was it in Touch that touched the hearts of many Japanese? Well… Koko de touch. lol. ^^;;